Angela Merkel has long dominated European and international politics. But this autumn, after 16 years in office, the German chancellor will stand down, leaving her party with the difficult task of finding a replacement. The process begins in earnest this weekend with the election of a new leader for her Christian Democrat CDU.

Many complain that the field of candidates is rather narrow. And, at first glance, the three straight, white, middle-aged men do appear somewhat indistinguishable. They all hail from the same region, North Rhine-Westphalia, and each has a law degree.

For obvious reasons they all claim to embody a credible future for both the centre-right CDU and Germany as a whole. And they make similar pledges to focus on issues like climate change and the digital economy.

But there are significant differences between them and the decision made by the CDU this weekend will tell us a lot about how the party envisages its post-Merkel future. So who is in the race to lead the party? 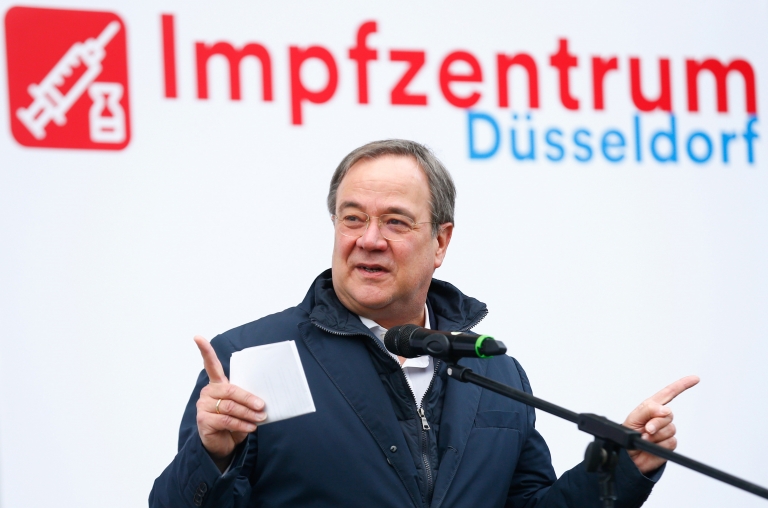 ReutersNo matter how it turns out, in the end we all stand together and help whoever winsArmin Laschet
State premier, North Rhine-Westphalia

Armin Laschet is a short, cheerful chap. The popular premier of Germany’s most populous state, North Rhine-Westphalia, he throws himself with gusto into traditional carnival celebrations.

He touts himself as a continuity candidate and, for a time at least, was thought to have been Angela Merkel’s preferred candidate. He defended her stance during the 2015 refugee crisis and is known for his liberal politics, passion for the EU and ability to connect with immigrant communities.

But his call for an early relaxation of Covid restrictions last spring surprised many and reportedly infuriated Mrs Merkel. He has since retreated from that position but he’s had to work to repair the damage to his political credibility. 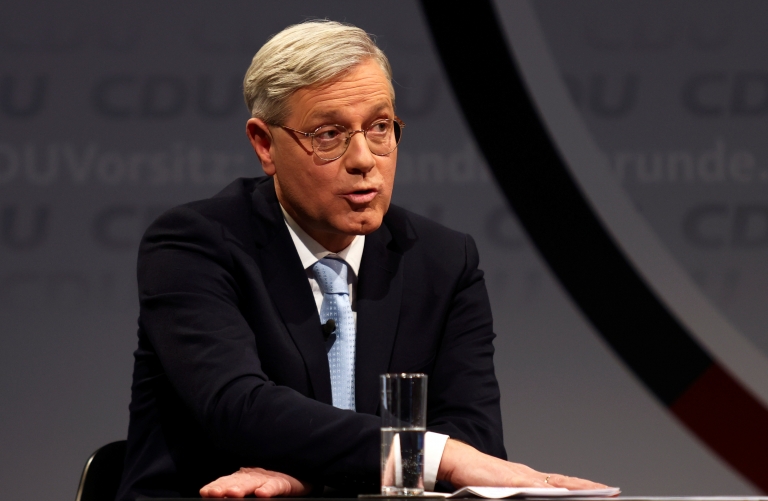 ReutersThe understanding in the CDU is totally clear: whoever gets picked as party leader is also trusted to have the ability and desire to be chancellorNorbert Röttgen

Norbert Röttgen presents himself as a breath of fresh air.

Once considered an unlikely winner, he has upped his chances with an energetic digital campaign aimed at women and younger voters, and even released a Spotify playlist.

A regular contributor to German news programmes and talk shows, he advocates a more hawkish stance on China and Russia. He’ll have to convince the party of his political abilities closer to home; Mrs Merkel sacked him from her cabinet in 2012 after he presided over a humiliating defeat for the CDU in a regional election. 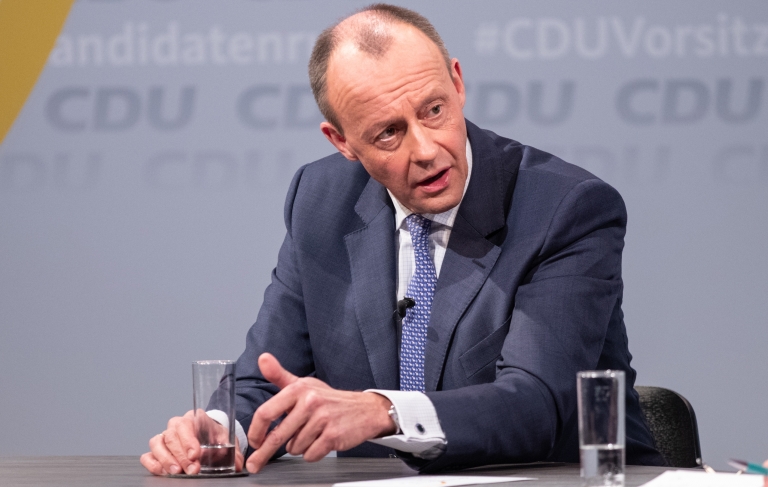 When Friedrich Merz blazed back onto the political scene in 2018 after almost 10 years away, many assumed he was out for revenge.

He was an influential figure in the CDU before Angela Merkel pushed him aside. He’s a skilled public speaker who has made a fortune in business and banking. He’s keen to advertise his economic expertise to a country which, sooner or later, will have to deal with the financial fall-out of the Covid pandemic.

While he has alarmed some with controversial comments about immigration and homosexuality, he appeals to traditionalists in the party who are unnerved by Mrs Merkel’s centrist politics.

Mr Merz leads the field in surveys of CDU members, but the decision will be made by 1,001 party delegates in a secret ballot.

One of those delegates is Katja Leikert. She’s looking for a moderniser, someone who’ll win more female voters and those from immigrant backgrounds for the party.

“We don’t need someone who just wants to differentiate themselves from Angela Merkel,” she told the BBC. “These were good times for Germany. But after 16 years we do need a fresh start.”

Why this vote won’t end the race for succession

Don’t assume – though it’s often been the case – that the successful candidate in the CDU race will be the next German chancellor.

It’ll be the spring before the CDU and its Bavarian sister party the CSU finally decide who’ll lead them into the September election as their Chancellor Candidate. After all, they want to be sure their man – and it will be a man – will win.

It may seem strange that, with just months to go before an historic election, there is no official candidate. That’s due in part to the fact that, when Angela Merkel resigned the party leadership in 2018, the subsequent election of Annegret Kramp-Karrenbauer was, in theory, the anointing of an approved heir. But AKK, as she’s known here, resigned after a series of gaffes, leaving the field open again.

And, just as the Covid pandemic has shuttered Germany’s shops and restaurants and restricted much of daily life, it’s also changed the political landscape; delaying and complicating the race to replace Mrs Merkel.

It has raised the profile and improved the chances of two other potential successors: Bavarian Prime Minister and CSU leader Markus Söder and Health Minister Jens Spahn. Both men insist they don’t want the top job – but nobody really believes them. 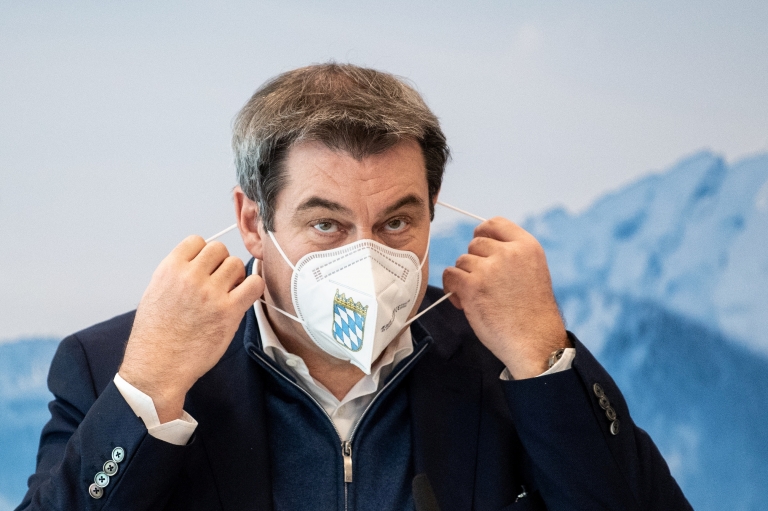 The Bavarian leader has emerged as a clear favourite in surveys of the public and CDU membership. His decisive handling of the pandemic in his state has increased his popularity. No CSU leader has ever made it to the chancellery but, within the CDU today, there is reportedly little resistance to the idea.

Still, political analyst Prof Ursula Münch thinks that, when Mr Söder says he wants to stay in Bavaria, he may mean it.

“It’s very important to be successful in Bavaria – that’s the main task of the CSU and they don’t have somebody else as well liked as Markus Söder in Bavaria.

“It’s not in the interest of the CSU to present a chancellor of the federal republic, because they’re more interested in fighting with the CDU. That’s one of the specialities of the CSU… these fights for example on migration policy in the past with a party very close to them are a recipe for success in Bavaria.”

Jens Spahn – Watching from the sidelines 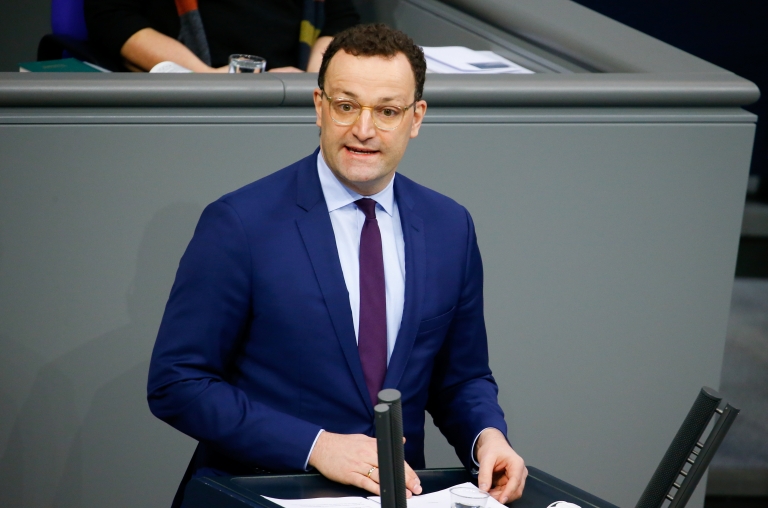 ReutersHow we get out of this pandemic will shape co-operation in Europe for the next few years or decades.Jens Spahn
German health minister

The health minister has performed well under the pressure of a pandemic.

Some colleagues were also impressed by the way in which Mr Spahn, who was once considered rather too ambitious, dealt gracefully with his failure to land the party leadership when he ran against AKK and Friedrich Merz in 2018.

He’s supporting Armin Laschet in his current bid, but he’s rumoured to have been sounding out party members over his own chances. It’s widely thought that, if Mr Laschet is unsuccessful or succeeds but retains insufficient support, then Mr Spahn will throw his hat into the ring.

Angela Merkel will, it seems, go out on a high.

Thanks to her response to the pandemic, she’s more popular than ever at home and her party is enjoying a much-improved position in opinion polls.

Whoever the party settles on as her successor will be disadvantaged by the fact that they do not have comparable clout and experience. But, as many here point out, 16 years ago, Angela Merkel had to learn the ropes too.

Just look, they say, at how she turned out.